Visual expression can be a powerful medium in helping children find a way into musical syntax, which can be applied both at the theoretical/analytical level and at the practical level.

Terminological drawing: by visualizing music- theoretical concepts children not only learn to understand a particular concept from within its musical context but also learn to symbolise the concept and acquire an understanding of its multiple meanings and universal character.

The method fosters both trans- and interdisciplinary thinking and a creative development in the longer term. 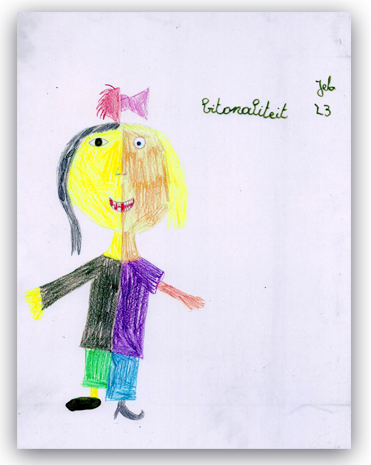 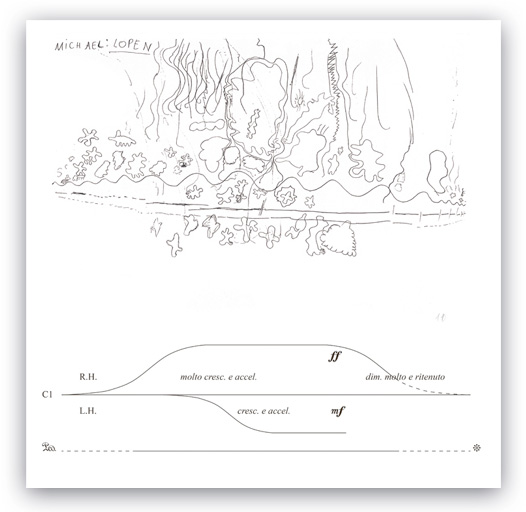 This drawing can be seen as a graphical score in which references are made to time and space. 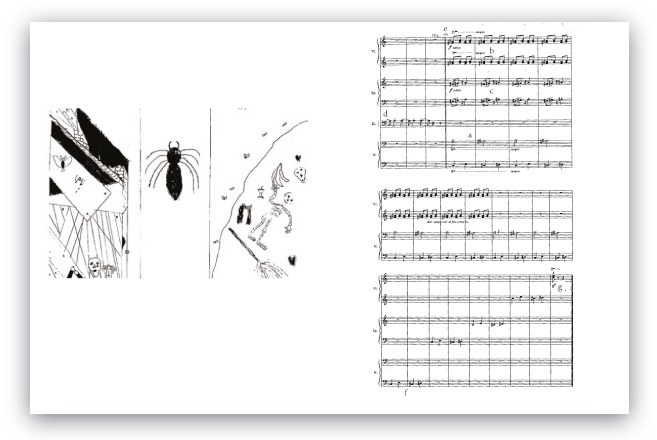 Story: it is night….a nightmare. A bat approaches and disappears, the same happens with a spider and then again with the bat. The nightmare is interrupted by the chimes of a clock striking midnight and after a silence the nightmare continues powerfully, with both the bat and the spider on stage at the same time. The spider and the bat disappear one after the other, everything ebbs away and the dawn breaks.

Remarkable: the incorporation of time has led to a golden section ratio. [ ] A shared psychological perception, a ‘group ear’ and their capacity to organise, resulted in a composition with a unity of structure, as if it had been the work of a single composer or an ensemble picture drawn by a single hand. 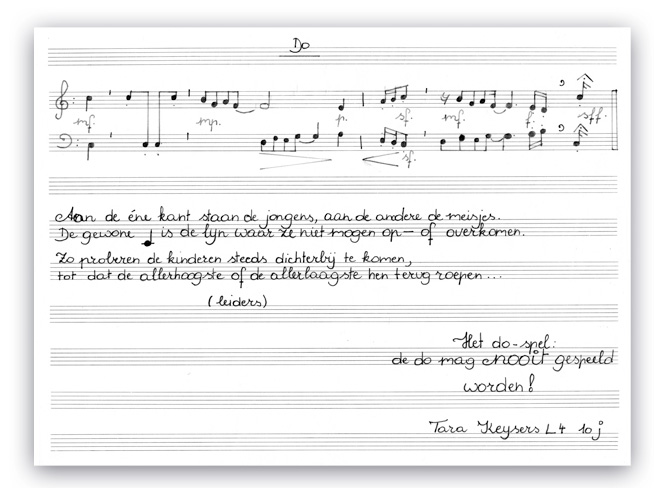 On the keyboard, Tara marks off a play area between two octaves, with middle C as the dividing line. Using motor symmetry, she lets the children move in such a way (at first defiantly with little steps, then more sneakily and finally boldly) that a structure with contrapuntal characteristics (imitation, inversion, retrograde motion and stretto) and asymmetrical rhythm and phrasing spontaneously appears. Here we see how an inner non-musical phenomenon (and transvisual picture) is projected via the structure of the keyboard and how rules of the game are crystallised into the smallest possible musical form

Note: It is interesting to compare Tara’s piece Do with Kurtág’s (1979) piece Hommage à Bartók. Both Tara and Kurtág play with the middle C, work symmetrically, create an asymmetrical phrasing and crystallise ideas into their smallest possible musical form. Both pieces would be enigmatic, if we did not know the underlying thoughts or title. Another aspect is that, in Do, a diatonic scale is organised from the rules of the game. If we look at Kurtág’s (1979) Flowers we are, Frail Flowers ...., we see how a diatonic scale is ordered from a poetic contemplation.

Just play with major and minor thirds in the form of a double chiasmus. 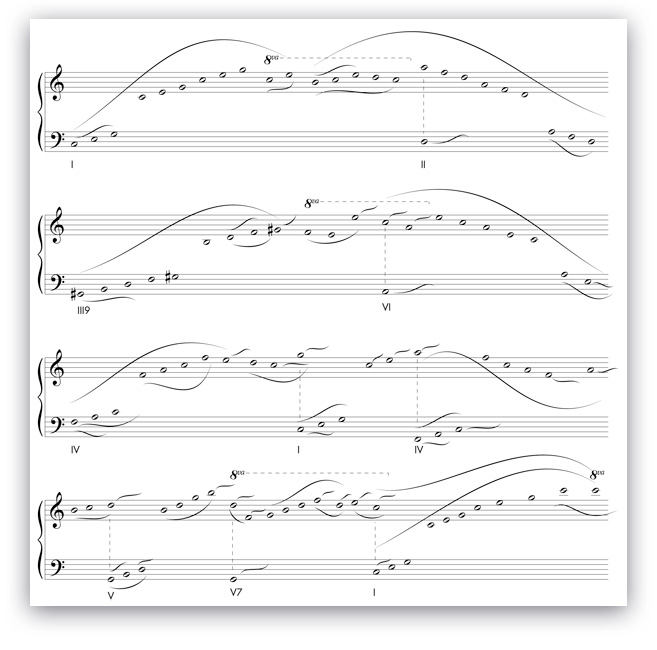 Create a chord scheme (functional harmony). Play broken chords up and down, alternating between both hands. Make a transition from one chord to another through a melodic turn. Delimit sentences with longer notes, rest, fermata. Try to visualise the parlando-rubato style in the score. 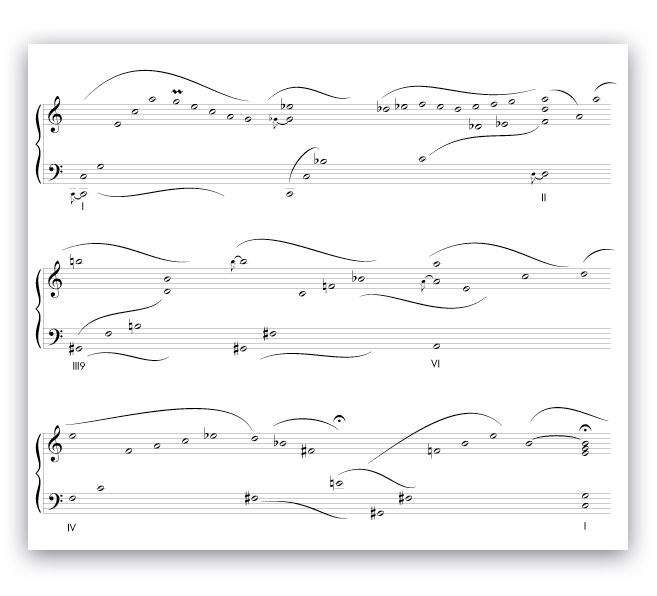 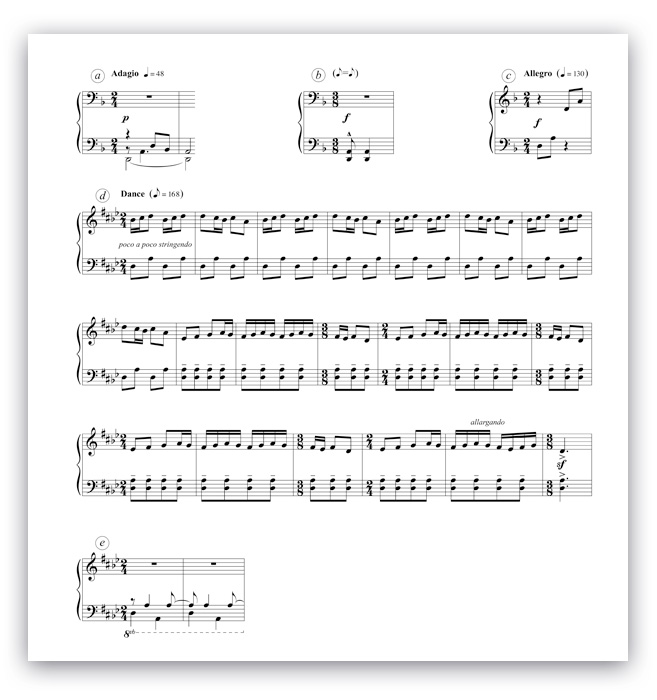 The double harmonic major scale is approached (strong beats) from the black keys. The melody contains spontaneously applied changes of measure. The strong beats shift opposite those of the secondo part, resulting in  the principle of the lowest common multiple.

Note: Jef has heard a lot of folk dance music and was able to assimilate its characteristics. Duda exhibits parallel characteristics with Dudás from Bartók (1938) and with the last number from Bartók (1994) in which, according to Geraedts (1961), Bartók incorporated an authentic ‘Duda’ melody. 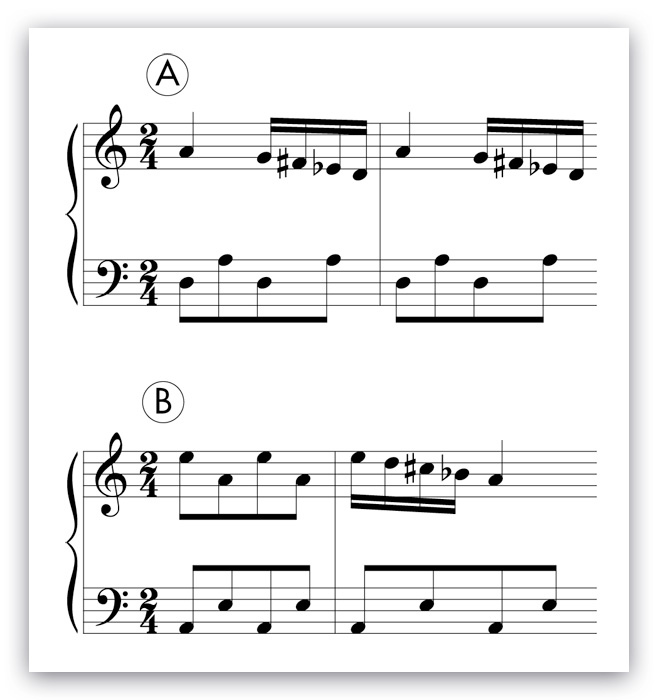 Based on a song created by Emma. The melody has an open character and is a combination of different modes.

This stilistic exercise was created together, entirely by ear, after Jef first studied a fugue from Bach's Well-Tempered Clavier. Techniques used are: imitation, modulation, transposition, variation and augmentation.